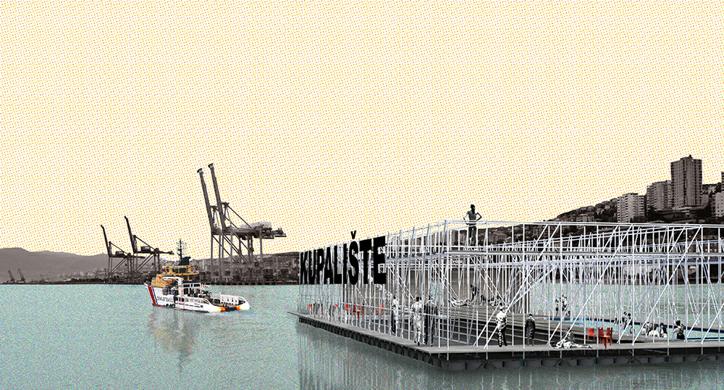 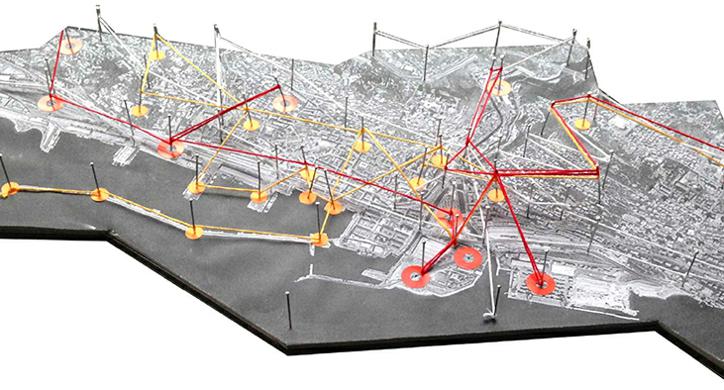 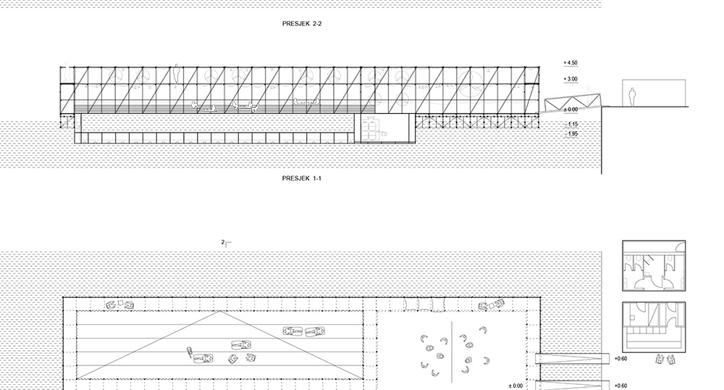 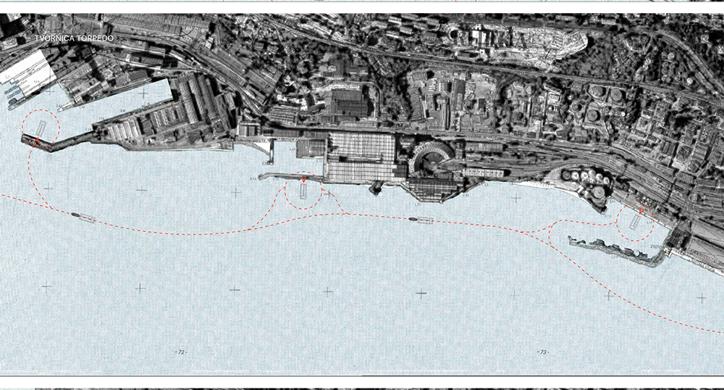 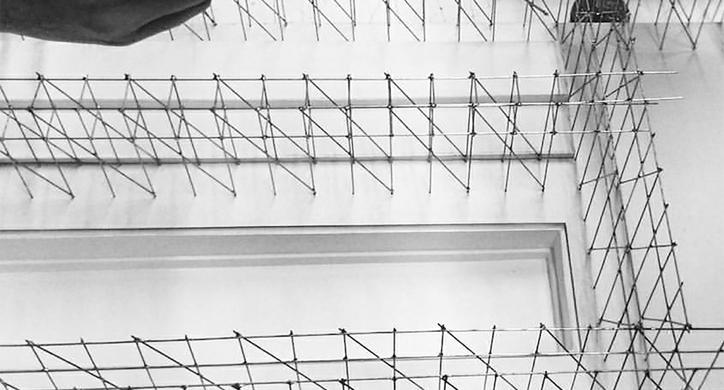 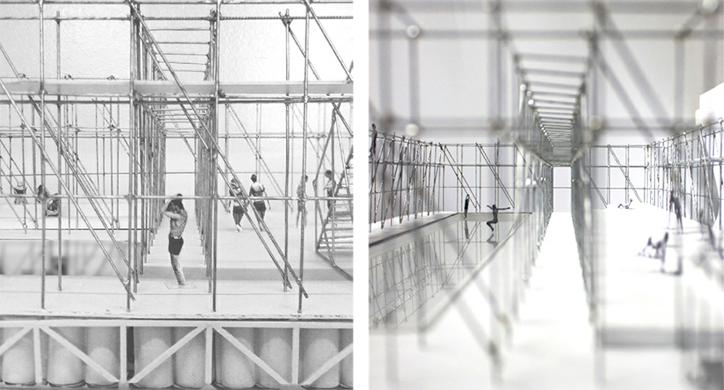 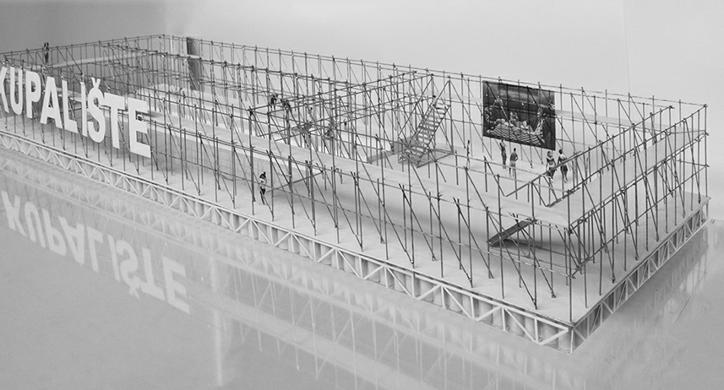 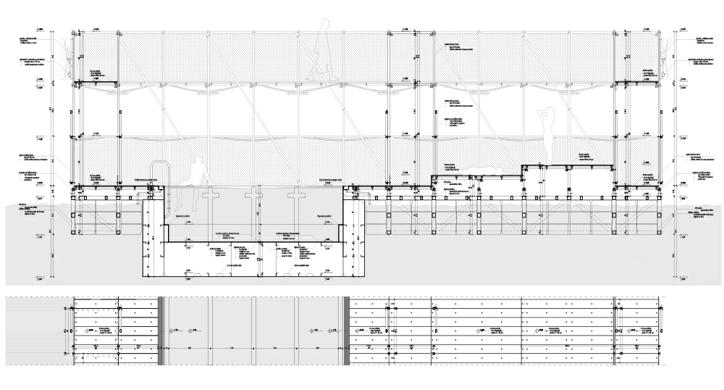 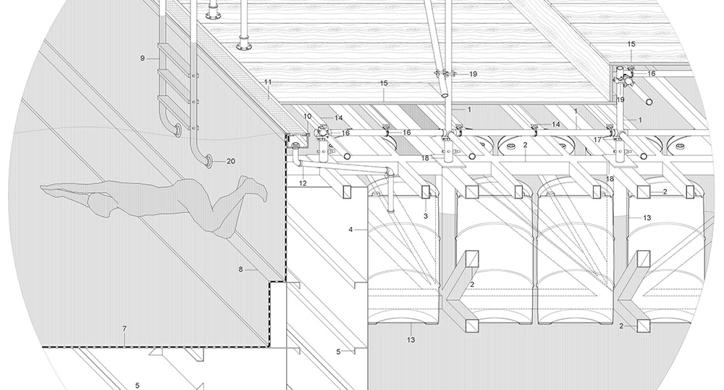 Autori: Robert Barbir, Nika Bralić, Ivana Brzović, Ivan BulianMentori: Mateo Biluš, Vedran Duplančić, Zorana ProtićAkademska godina: 2017. Katedra za arhitektonske konstrukcije i zgradarstvoKabinet za arhitektonske konstrukcije, fiziku zgrade, materijale i tehnologiju građenja
The Floating Bath project was devised as a part of the workshop on the Department of architectural technology and building science, with topic RE: Parasites of Rijeka under the project Rijeka: European Capital of Culture 2020. The task was to develop anything related to parasitic architecture. The team had to propose location, function and measures as they were not strictly defined.
Rijeka’s industrial area functions as a boundary between sea and the rest of the urban fabric, which is not an active part of city’s public space. However, this was not the case in the past. During the 19th and 20th century this space was used despite being industrial zone. Rijeka’s bathing areas existed along the coast from Sušak to Kantrida, both on the waterfront and breakwater. Those areas were not beaches, but constructions on the sea. Locals’ and visitors’ primary interest was socialization in those places. Therefore, The Mobile Bath project seems a logical motif in the context of representing Rijeka as European Capital of Culture. Almost minimal intervention is required to reveal the potential of coastal industry area. This potential includes area’s possibility to activate, transform, integrate into the city and create a whole new perception of the city from the sea.
The structure is defined by construction of a series of variant models. Its basic elements are buoy with a pool and standard steel scaffold (superstructure). Buoy functions as a surface for facilities and events, while scaffold serves as a frame for infrastructure. They are connected into one static unit. The pool functions as a weight which, when emptied, makes use of buoy’s cavity following the principle of ballast tank. The pool filters the seawater with sand and UV filters because the sea in the bathing areas does not always meet the standards of hygiene. The water, cleaner than before, pours back into the sea.
The development of the project was accompanied by research – from the analysis of examples of parasitic architecture, potential locations mapping, tracking traditional continuity of urban social life to checking the availability of local sources of materials and necessary conditions for functional usage. Each part of the concept (mobility, bath function, recycled materials) is a result or was confirmed by an independent research, consultations with 3. Maj shipyard staff and in a final stage with Faculty of Civil Engineering staff . The collected information was used in order to bring this idea to a level of a project with implementation details, accompanied by a cost estimate. 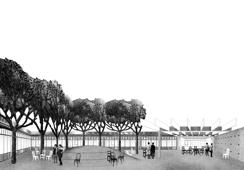 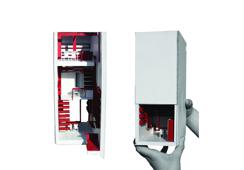