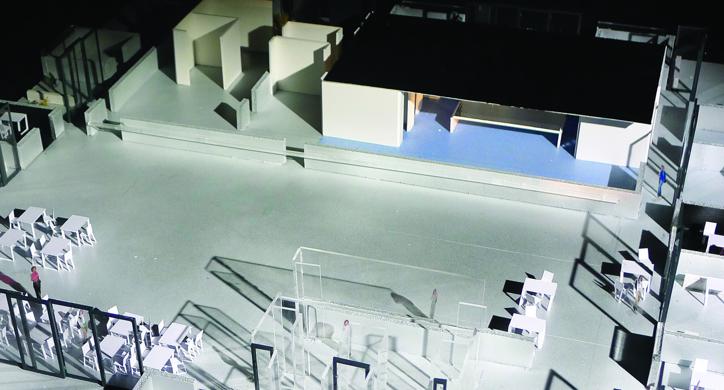 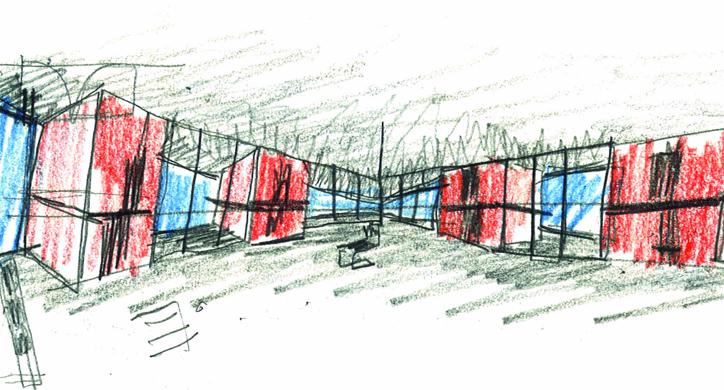 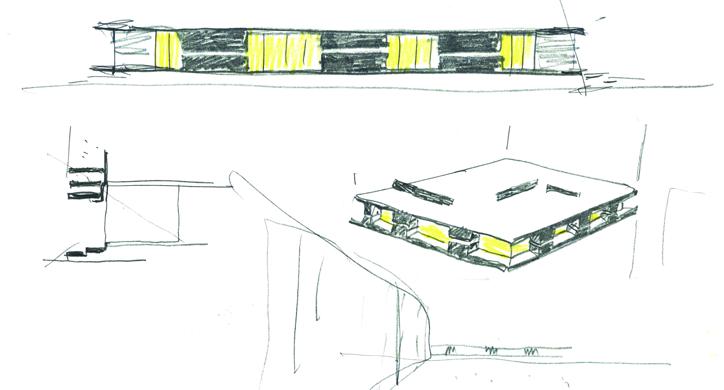 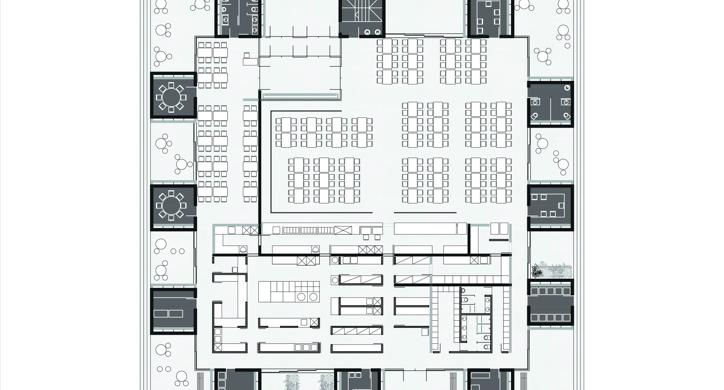 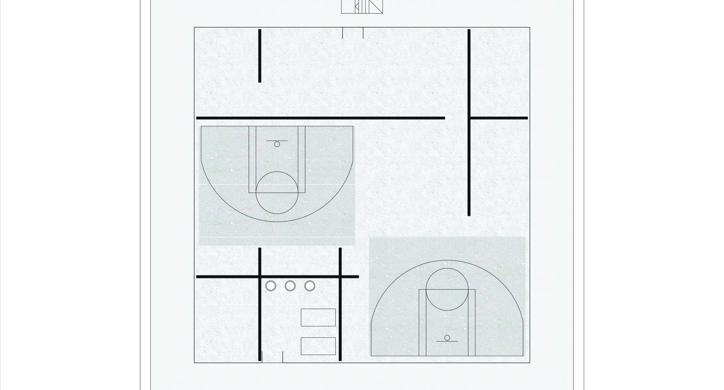 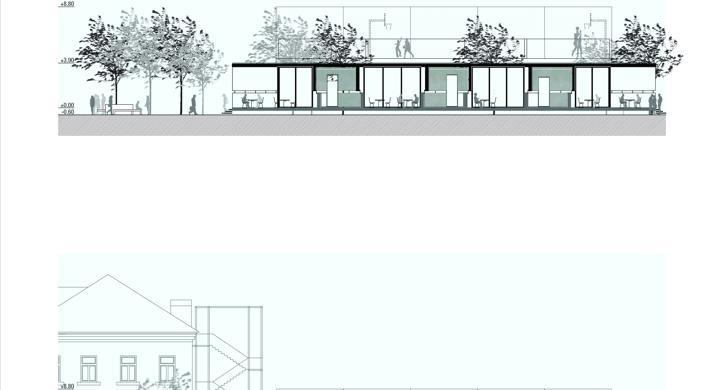 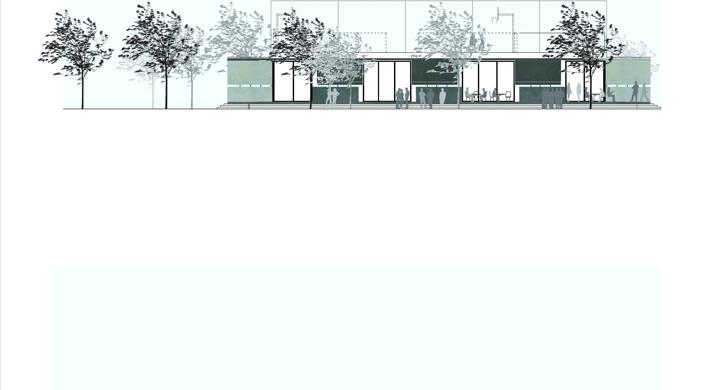 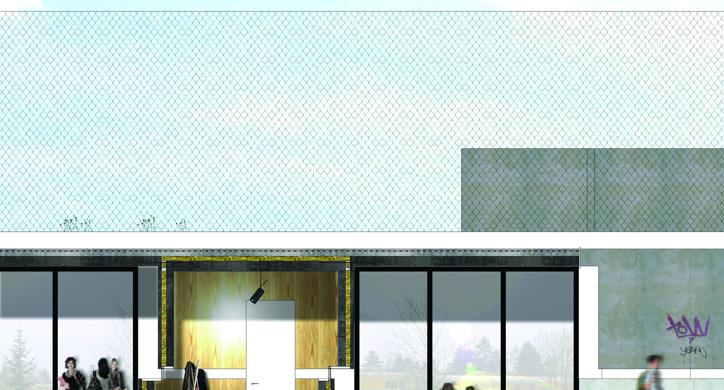 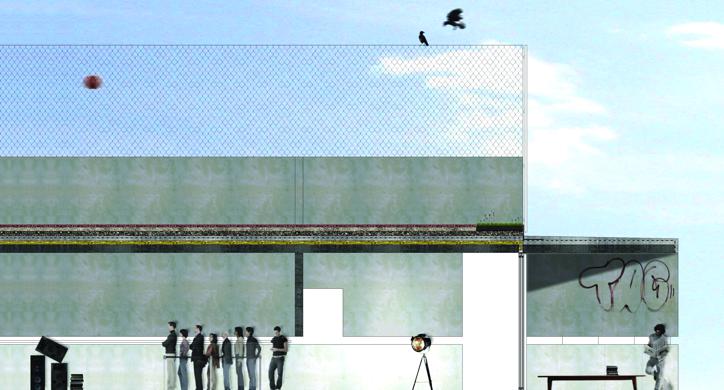 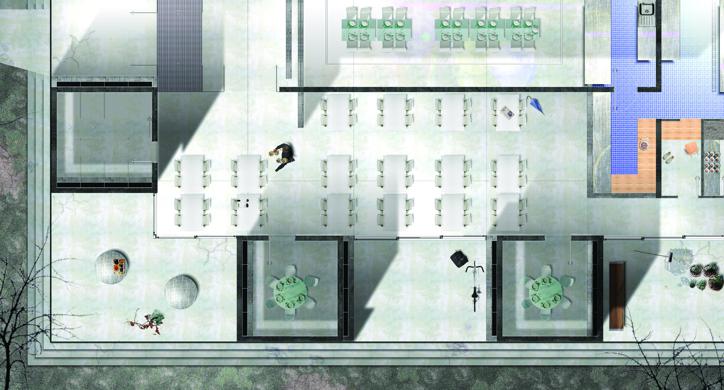 Autor: Igor Franić
In its basic structure, the new building of the student restaurant is a pavilion – with all sides being uniform, and an emphasized central part. With its prominent dimensions in relation to the size of allocated lot, it establishes relations through marginal contacts. It is positioned on the edge of the lot, along the street, and thus, ‘belongs’ more to the city and the road. Its entrance faces the student park; by its horizontal form it creates a square, a green area of the main entrance. The pavilion is close to the existing building, and thus, a narrow passage is being formed towards the rear of the campus.

Regardless of the fact that it is formed as a pavilion, the size of the new restaurant, in a way, turns it into an urban element that marginally resolves the relationship to the existing environment. The most important part of the structure of the restaurant building is its peripheral area. The alternation of full elements and recessed porches of clear dimensions forms a relationship to the environment. In this way, an active space is created which belongs both the building and public space. This is a zone to stay, meet, have meals and fun. Within the closed units, there are areas for concentrating, a possible quiet meal with a book on the table and the rest from a hive of activity of everyday student life; such tranquillity is sometimes most necessary in students' lives.

The central space is divided into the areas of self-service restaurant, à la carte restaurant and a comfortable, fully functional kitchen. An additional element which makes the building unique is a horizontal cut at eye level when one is in a seated position. In this way, the building is not divided into an upper and lower part with walls in between. Along the bottom plane walls up to the height of 120 cm are clearly connected, and load-bearing beams and other vertical partitions higher than 150 cm are an integral part of the ceiling panel. This horizontal line makes the building look as if it were slightly shifted, as if a new order and tranquility were established, a tranquillity that one feels only when seated.

The building’s own spatial structure is recognizable; it is uniform on all sides and consistently implemented through the construction system. Temporal matrices and history in terms of alternation of sensibility, spatial, technological and socio-political givens of the location, possibilities of adjustment to new requirements and many other parameters, determine the forces forming the object. The barracks become a student campus – as a new recruitment of democratic aspirations.

A good student life consists of a more or less routine circle of activities and familiar space. The basic feature of such a way of life is intensity and temporariness. The idea of coherence in a temporary place of residence is an anachronism, canonization. The strictness and symmetry of the existing building dictates the forming of ‘service’ spaces. In the given frame of the lot, the follies of various purposes are realized. The restaurant is an open object of messages, offering a wide range of interpretative possibilities; in addition, it demonstrates many aspects and resonances of multitasking, without ceasing to be what it is and what its basic purpose is. The restaurant is the most important social component in the campus. Its size makes it the largest common area, the most important meeting place; it exceeds the mere satisfaction of an existential need. The façade is a glass membrane which separates internal from external space, forming different relations, depending on the surrounding space; it is a shop window facing the street along the walkway; on the opposite side, it is a private courtyard space. A transferred meadow of the roof, orthogonal isoline, becomes a field and auditorium. The eaves emphasise the character of a living room, veranda. Layers of transition from inside towards outside, or vice versa, are multiple, depending on the micro-location. The break in the intersection is a conscious change of the angle of view – when one is seated (which is a usual position) the space opens up, a subtle borderline moves – the Steiner relationship of a body in space. The dynamics is achieved by alternating extroverted glass wall and ‘closed’ cubes, which accommodate different ways of eating a meal – music, Internet, silence, or just isolation, a change in colour and atmosphere.

The student dormitory with accompanying facilities is situated in the courtyard area; on the north side it opens up towards the road. In view of its existing dimensions, all new accommodation capacities are organised in a single building. The openness of the form enables clear organisation, but also the rationality of two wings – with straight and rounded deviations – for the accompanying facilities. A sunken section of the urban area establishes contact with the parking lot, too, and forms a common introverted square for future student activities. 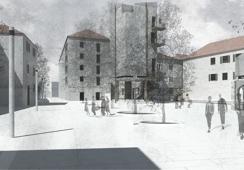 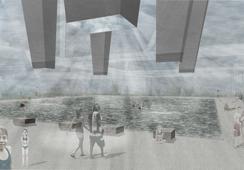