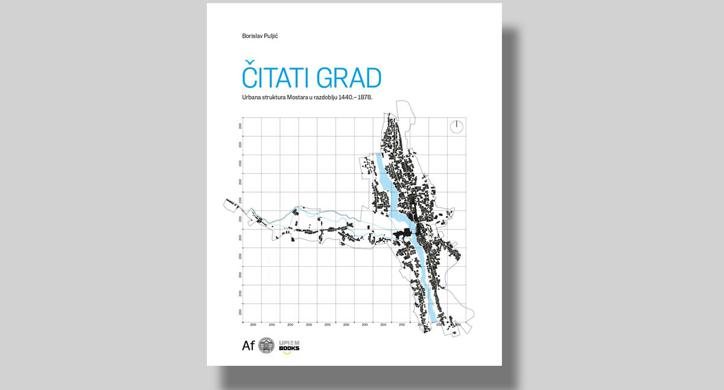 Autor: Borislav Puljić Izdavač: UPI2M, Arhitektonski fakultet Sveučilišta u ZagrebuMjesto izdanja: ZagrebGodina izdanja: 2020ISBN: 978-953-7703-56-1
The scientific monograph entitled Reading the City by the architect Borislav Puljić is dedicated to the Ottoman phase of urban development and building up the city of Mostar from the 15th to the 19th century.
It is a revised and extended version of Puljić’s doctoral dissertation defended in 2012 at the Faculty of Architecture in Zagreb. Essentially, the book gives a synthesis of an in-depth research into Mostar’s urbanity and architecture. Puljić began his studies on the city of Mostar in 1985 within the postgraduate program ‘Architectural Heritage’ in Split. During his doctoral studies he published a few scientific papers on Mostar and its mahalas, fortifications and the first Austro-Hungarian group of professionally educated architects. His methodological procédé is multi-layered and comprehensive. As a researcher, he competently uses tools borrowed from archival science, cartography, historiographic analysis and
even archaeology. His own field research over decades has proved to be a valuable source of information as he meticulously explored the entire city.